I am happy to be a guest of Susanne Behrens in the studio during the European Days of Arts and Crafts.

I'll be there on Saturday.

Spring Fair in the House for Arts and Crafts in the heart of Hamburg- with a proven hygiene concept from last winter.

in den Räumen der Gedok in St. Georg in Hamburg.

Solo exhibition on the subject of sound.

Silke Decker and Silke Lazarević in the rooms of the Gedok in St. Georg in Hamburg.

Funded by: "Art knows no shutdown".

Online art auction for the benefit of the Hamburger Hospiz e.V. I donated one of my vases on the subject of "Turning of the Times and Heimatfieber". You can still bid on my vase or other works until December 9th.

"Silke Decker discovered the porcelain for herself - the Hamburg-based designer developed the technique of cord porcelain and creates delicate treasures from it."

News from the studio

In the spring I took the time to experiment a bit more intensively. I made patterns of porcelain in combination with clay, fiberglass and breakfast cereals and have found some exciting approaches that I would like to pursue on occasion. I'll keep you up to date.

Workshops  for experimental working with porcelain with the title "Filigrane porcelain objekts - dipping material into fluid porcelain". The intent is the joy of experimenting and the stimulation to new ideas. 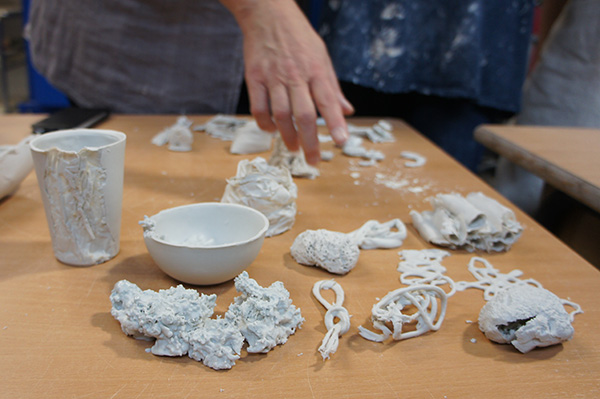 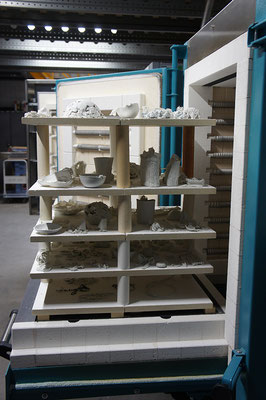 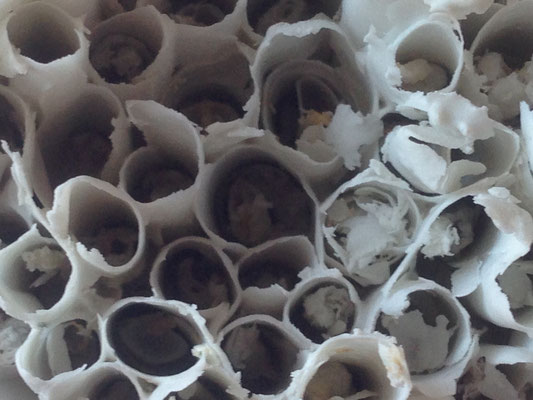 A performance show by the artisans of Hamburg in the Museum of Hamburg History.

in Neumünster in the Museum Tuch + Technik

Invited by the Tsinghua University I flew to Beijing and for a week I taught students of the arts department of the university.

A Chinese ceramist whom I got to know through the scholarship programme of the Peteriemssen Foundation is a lecturer for porcelain design there. The Chinese education is strongly structured and divided into blocks. There are hardly any possibilities to experiment. That's why it was especially fun to see the young people following the approach of experimental idea-finding with joy after a short time.

Afterwards I flew together with the Chinese lecturer to the south of China, to Dehua. There we visited manufactories with different focuses. Vascular stoneware with various glazes, a very large factory and the small manufactory in which we worked for a week. The owner and artistic director is a sculptor and designs sculptures for the Chinese market which are then reproduced by his workers. Traditional or modern interpretations of figures of Chinese history or mysticism. The material used there is extremely fine and specially suitable for detailed motives. Most workers put the figures together and clean them up. Just a few female workers specialise in the production of flowers and flower arranntments. The concepts I had thought about before could not be realised there, it was necessary to rethink quickly. But the flowers fascinated me and quickly a concept was found. The object series is called Anthropozene.

The insect sitting on the hyperrealistic flower is a playful approach to the questions of what will happen when when insects go extinct? What will humans create to fill the gap?

Enlarged as if magnified, the insect reveals the construction of its body.

Works by 13 international ceramists are exhibited, joining their work is the textile impression, althrough the material has been handled very differently.

Selb, is traditionally a porcelain centre. On this festive weekend, the city hosts Europe's largest porcelain flea market, local porcelain manufacturers open special factory outlets and celebrations take place. My exhibition will be in the garden of the goldsmith Brunat, right next to the porcelain fountain.

in great sadness, I must announce that Peter Siemssen, founder of the Peter-Siemssen-Foundation, for the promotion of ceramic art, in whose family and foundation I found an artistic home died 27 th July 2017.

With his talent to link the beautiful things and the commercial, he created the term "cordporcelain". He was convinced that the viewer and the customer would have the same idea and thus aroused curiosity and interest. He believed in me and the cordporcelain that I create, and has guided and promoted me in this faith for years. In gratitude and with countless advices in the back of my head, I will continue our joint project of the "cordporcelain".

Image: Peter Siemssen and Silke Decker at the Exhibition celebrating the publication of "Ceramics-a lifelong passion" 2007.

128 artists  from all over the world present their skills.  The spectrum ranges from crockery, animal and figural ceramics, sculptures, garden ceramics, salt and smoke fires  to original individual pieces.  Every year more than 60,000 visitors visit the popular open-air gallery around the Oldenburg Castle.  In addition to the market, two ceramic exhibitions in the castle enrich the program.